Ice fishing is one of those things that you can only do in the extreme cold. Yet the extreme cold that makes the activity possible also makes it harder to participate in one crucial aspect of all fishing: drinking.

Enter Hillbillies Ice Hole, a bar on top of a frozen lake with ice fishing holes in the floor. Snowbirds can go ahead and stop reading now.

Hillbillies Ice Hole is on the north side of Lake Lida, a remote lake in central Minnesota near Pelican Rapids. 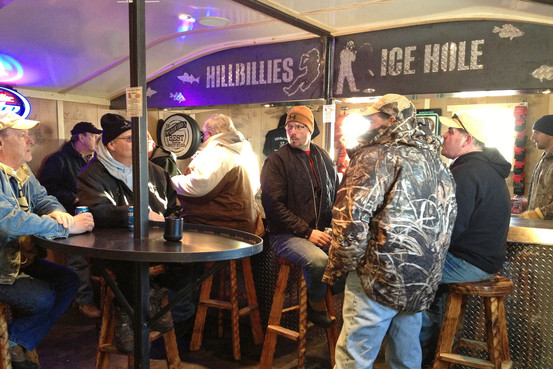 To get there, you drive past the public access point and traverse across the ice until you see a little red building. Park anywhere you want and walk right in—there you’ll find the most Minnesota thing of all time.

On the edges of the bar, people drop their lines baited with live minnows into holes in the floor. Fish like sunfish, crappie, walleye and bass are waiting to be caught below the ice. The bar serves up wine, beer and cocktails with occasional specials like $1.50 draft beer and $3 Jack Daniel’s shots. Even if you don’t catch anything, you can be sure that the brews are always cold.

If you’re not the fishing type, you can still participate by taking a minnow shot at the bar. It’s a local favorite and exactly what it sounds like: A live minnow is dropped into your shot of choice (be that whiskey, vodka or whatever) and then quickly dropped down the hatch, leaving the fish to wiggle its way into your stomach.

The bar is a seasonal pop-up of sorts that’s been opening in January and February since 2012. It’s owned by Josie Norgren, who also owns Hillbillies Vittles & Brew in nearby Erhard, Minnesota.

It’s only open on Fridays and Saturdays, and the bar has to be hauled out onto the ice every morning then taken down and packed up every night. Based on the conditions, Hillbillies Ice Bar gets to open about 20 days total for the year.