The new 2020 Ford Mustang GT500 is not for amateurs. With over 700 horsepower on tap, a 0-62 mph time of 3.5 seconds and a quarter-mile sprint in less than 11 seconds, the 5.3-liter supercharged V8 ultimate Mustang muscle car needs to be driven by those with experience. As we wait for official pricing to be announced, there still remains one key bit of information Ford did not previously reveal: weight.

Thankfully, the folks at Mustang6g.com forum got their hands on the 2020 Shelby GT500 eSourceBook, an 86-page long information guide for dealerships that will help sales personal and technicians learn more about this incredible vehicle. Fortunately, the guide does, in fact, reveal an approximate base curb weight of 4,225 pounds. Not exactly a lightweight. Then again, the Dodge Challenger SRT Hellcat tips the scale at 4,450 pounds. The Chevrolet Camaro ZL1, however, weighs 3,890 pounds.

Ford has yet to officially confirm this figure but given the source, there’s a high likelihood it is indeed correct. Ford reportedly benchmarked both the Dodge and Chevy throughout the Shelby GT500’s development and, based on its initial specs, it appears these fellow Detroit natives will soon have some work to do. Ford went to great lengths to differentiate the Shelby GT500 from the currently on sale Shelby GT350 with not only greater power and performance, but also appearance.

The GT500 sports a fighter-jet inspired body incorporating a louvered hood and a new rear spoiler as well as front fascia openings that are twice as large as those on the GT350. The interior is decked out with Recaro racing seats, a 12-speaker B&O sound system, and an eight-inch touchscreen.

Despite not knowing pricing just yet, we can make a fairly decent guess. The Mustang Shelby GT350 begins at just under $60,000 and in order to properly separate the two, we don’t expect the GT500 to be sold for less than $70,000. We’ll hopefully have our answer soon.

Constance Nunes Is the Hottest Mechanic in the Business 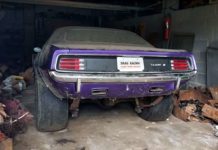