You’re riding along on a quiet country road.

You take sharp deep breath and sigh in relief to get away from your office and boss which you named “The Gulag” and “Jong Un” respectively in your phone.

Let’s not get to the Mrs.

But as you ride under a natural canopy formed by overhanging branches, you wonder how nice it would be if other bikers had ridden here and admired such beauty. You make a mental note to share this route on Facebook later.

With that positive thought in mind, you notice quaint houses that dot the roadside every few miles, but they all seem empty. There isn’t a car or a motorcycle for the last 20 miles, come to think of it. Not a soul except for birds darting among the branches. Some loneliness, or a pang of guilt, perhaps?

A few more miles down the road and you spot a group of bright lights heading up the hill towards you. Your mind goes HEY!and you smile in your helmet. As your draw near, you notice they are riding the same model as yours, perhaps it’s a same-make ride. So, you take your left hand off the handlebar and flash a peace sign to the side.

The leader looked straight on as he passes by as if he doesn’t want to acknowledge seeing a ghost. Slightly miffed, you keep waving, but the rest of the group did the same too

The road in front of them is clear. Are my bike and I cloaked in an invisibility shield? Was it because they didn’t notice my hand because of the black gloves? Am I already dead and my soul continues to ride (not so bad, actually)?

That episode leaves you seething under your helmet for the next 10 miles, swearing their spark plugs would quit working. Or a coronal mass ejection (CME) shorted out their ECUs. Or the same CME blew out their GPS and send them wayward – like off a cliff (It’s mean, I know, but let’s be honest).

The above scenario isn’t unique to a one particular occasion, it seems because it’s happening more often on a daily basis. Everyone waved at each other (when conditions allow it) when I started biking in the 80’s. It didn’t matter what either party rode; be it a sports biker and a Hog rider waving at each other, or even to those on smaller motorcycles.

However, bikers don’t even wave at each other these days, despite being on the same model, what more when encountering others on different makes. Or worse, they’d return your wave by flipping the bird (the middle finger). Oh yes. I’m not being annoyed because of not being acknowledged but are people so full of themselves these days? Ironically, I bet they pound their chests about “brotherhood” and “sisterhood” at biker meets. But I’ve often noticed male bikers waving to lady bikers without reservation. Tsk tsk!

Waving at another motorcyclist is also to tell him or her about the dangers that lie ahead. Well, I still wave at other bikers these days. But I don’t wait around for their response anymore. 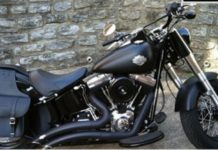 Tips for Winterizing Your Harley